When it comes to gemstones you may think of them as only being found in far-off lands or grown in jewelry laboratories. But even if you don’t see them on the surface, some common gemstones may be sitting right in your backyard. And, in this article, we’ll be discussing just how to find gemstones in your backyard. Common Gems That Can be Found in Yards

Though you probably won’t find a diamond in the rough of your lawn, there are a few gems that you may be able to hunt down right at home.

Here are a few possibilities:

Now that we’ve covered the gemstones you’re likely to run across, let’s go over how to find gemstones in your backyard and the tools you’ll need to go about doing so.

While you might get lucky and find a gemstone lying on the ground, others may require a little more effort to remove. Here’re some basic tools you might need:

After you have your tools, it’s time to find a place in your backyard to gem hunt. Limestone deposits are a great place to start if you have any nearby, considering many types of gemstones like to mingle in these areas. Alternatively, you can start digging around a rocky area in your yard.

If you have water, like a creek, river or oceanside near your property, these are also promising areas for potentially finding gemstones. When it comes to how to find gemstones in your backyard, it really depends on luck — and the area in which you live. If the geography is off, you may be out of luck. So always search in the aforementioned areas that will most likely house stones.

After You’ve Found Your Gemstone

In the next few sections, we’ll be going over how to identify and prepare your gemstone.

If you have a  stroke of luck and happen to find a gemstone or two, first start by cleaning the stone with a gem cloth. You should fold the gem cloth in half and then in half again, to make a square. Turn back one corner and ”tuck” your stone inside. Rub the stone firmly between your fingers in order to clean off any fingerprints, dirt, lint, dust, oil from your hands, etc.

Some stones may have a dull outer layer and will need to be professionally sanded by a jeweler.

Though there is an endless possibility of gemstones that you could find in your yard, in this section, we’ll be discussing how you can identify the most common backyard gemstones; listed above. Though quartz comes in quite a variety of colors and shapes, there are a few ways that you can easily identify this gemstone.

Other quartz colors that you may run across, though in a more rare circumstance, are pink and green. For more information on identifying quartz, check out this informative article. Identifying turquoise is easy, right? Well, yes and no.

You can actually mistake a fairly common stone, called Howlite, for turquoise. If you happen to live in a neighborhood or in an area that’s been inhabited for a while, it’s possible that you may run across dyed Howlite. 90% of “turquoise” on the market today is actually this dyed mineral. Howlite is a highly absorbant white mineral — and it’s definitely not natural turquoise, though it mimics it quite well.

In order to confirm that you have natural turquoise, the easiest thing to do is to rub a bit of acetone — yep, nail polish remover — on a small edge of the supposed turquoise stone. If you’ve run across dyed howlite, the blue color will seep onto the cotton ball or q-tip and reveal the white stone underneath. If no color is removed, you have a natural turquoise stone.

Another way to identify turquoise is the color and texture. Natural turquoise is very rarely one uniform color. Take a look at the photo above. There are browns, blacks, and other rock colors mixed in with the blue in a webbed appearance. Some turquoise gems even look greenish-brown or blueish-green. As for the texture, if you run your fingers across the webbed areas and your skin catches, you have a natural stone.

This is because the webbing is created by mineral deposits from the stone the turquoise grew in. Over time, the “parent stone” erodes and leaves behind a bumpy texture along these discolored lines. There are a few ways to ensure that your supposed Jade gemstone is legitimate. The first is to look for any flaws. While this may seem counterintuitive, flaws in the color or texture, and especially vein-like impurities when looked at under the microscope, could indicate a natural stone. If you take your Jade to the microscope and see any bubbles, though, it’s likely not authentic.

The next way to check for authenticity is by utilizing the scratch test. Authentic Jade cannot be scratched by steel. Take a needle and attempt to scratch the gem. If a visible scratch is left in the stone, the Jade is fake.

For more information on how to authenticate a Jade stone, check out this article. Garnet is a particularly easy gemstone to identify and it can be done simply by eye. Hold the garnet very close to your eye, so that you can feel the stone touching your eyelashes. Point the stone towards a light source six feet away, such as a window or bright lamp. You should see rainbows in the garnet.

Focus on one rainbow and confirm that every color is present. You should observe blue, green, yellow, orange, and red bands. If you don’t see the green and yellow bands, you don’t have a garnet — but it is possible that you have a Ruby.

You can also utilize the hardness/scratch test. If you have a piece of steel lying around, attempt to scratch it with the Garnet. If you have an authentic garnet, the steel will be visibly scratched. Garnet should not be able to be scratched by steel. Opal can be recognized by its fluorescent properties. Synthetic opals often to not fluoresce when put under a light. Fake opal is also more porous than natural opal and has a more uniform color throughout (whereas natural opal will have different colors displayed throughout its body).

For more on identifying fake opals, check out this article. Tourmaline has a few characteristics that can aid in identifying this gemstone. Let’s take a look at what those are:

For more on tourmaline, check out this educational article. 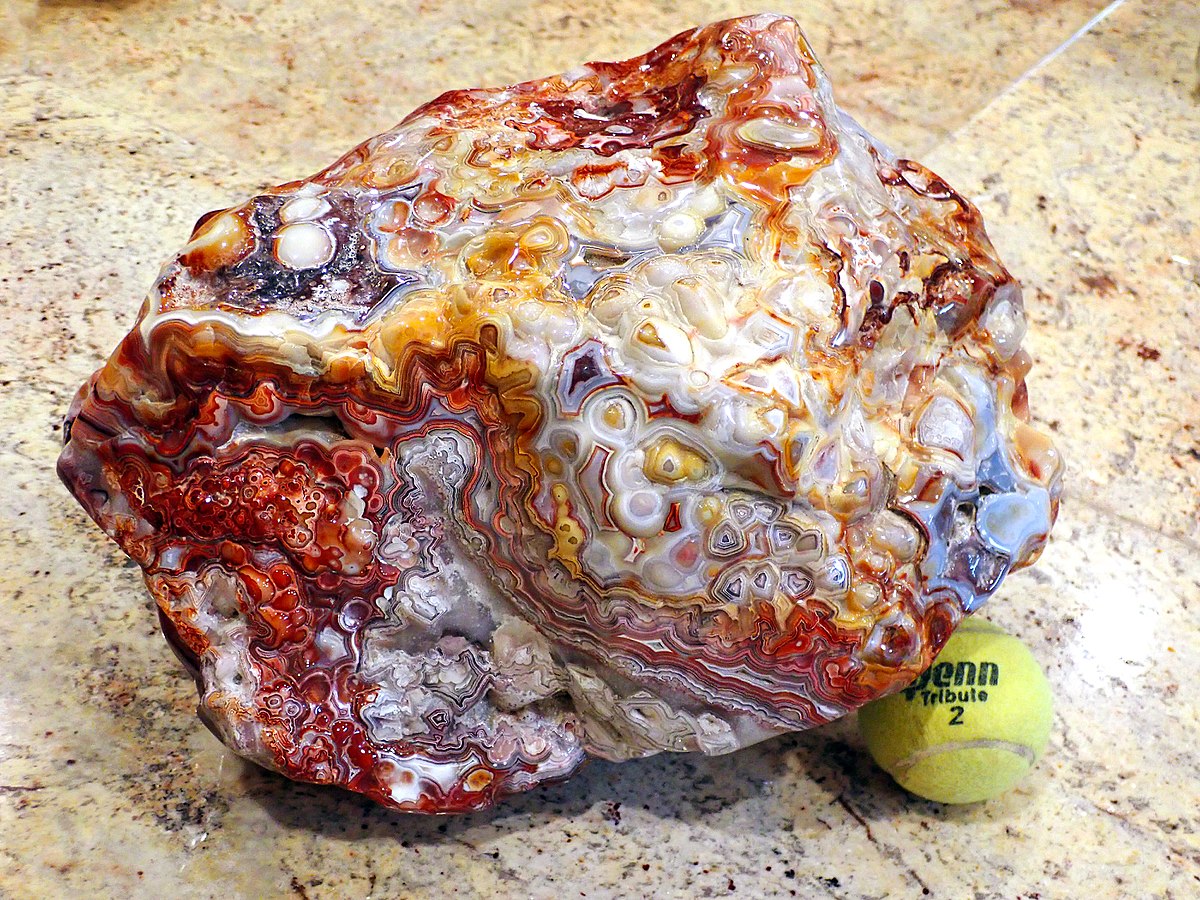 Agate that isn’t broken open will look twisted with distorted coloring and stripes, as shown in the photo above. You’ll likely find these gems in an area that is saturated with rocks. If you notice a reddish, striped stone, the best way to identify it as Agate is by holding it up to the sun, or another intense light source. If the stone is semi-translucent and you can make out obviously reddish striping or “marbling”, you’ve likely got an Agate gem on your hands!

The bolder the striped pattern, the more your Agate is worth.

Appraising and Selling Your Gemstones

If you’ve run across a high-quality gemstone or two in your backyard, you may be considering selling the gem for profit. If you’re not sure how much to ask for your gemstone, or where to sell it, you’ll first want to get your stone appraised in order to slap the right price tag on it.

Getting Your Gem Appraised

When it comes to finding out the worth of your gem, you’ll need to take it to a respectable appraiser. We suggest taking a look at this list of contacts for Appraisal Associations near you. When you take your gem to be appraised, the first thing the appraiser will do is look at the quality of the stone. If the quality doesn’t make it up to scratch, it may be entirely worthless, or worth very little.

The ultimate price of your gemstone will also fall down to the rarity of the stone, the availability of the gem on the current market, the popular fashion of the time, and the demand for the stone for jewelry making or other uses. Once your gem has been properly appraised, and you have your price, you can now move on to attempting to sell your gem.

When it comes to selling a gemstone that isn’t refined, and isn’t sculpted or placed into a piece of jewelry is at an auction house. You can try selling your gem at a local auction house, or at an online auction house, which would give you access to a wider variety of buyers who may be interested in purchasing your gem.

Of course, you don’t want to attempt to sell your gemstone at just ANY old auction house — you’ll want to find an auction house that is dedicated to fine jewelry and gemstones. Take a look at this helpful guide to auction houses that specialize in gemstones to find one near you.

If there isn’t an auction house near you, or you’d rather find an alternative method for selling your gem, you can also see if local jewelry shops, jewelry makers, or specialty shops would be interested in purchasing your gem. Unless you know of someone who can give you a really good deal on your gem, we would recommend that you try to sell your gem at a gem-focused online or in-person action house.

When it comes to how to find gemstones in your backyard, the task can seem like an impossible one. But with the right knowledge of where to look and how to identify common stones properly, you may just hit gold!

We hope our guide helped you in your quest for precious stones! Happy hunting!