Having a squirrel infestation is never a good thing, and the problem is, they’re extremely elusive and smart when it comes to avoiding danger, which makes them difficult to catch. This set of characteristics will leave some homeowners with the sole option of killing squirrels to get rid of them. In today’s guide, we’ll discuss all the different methods on how to kill squirrels. We’ll also provide you with a quick guide to humane alternatives that might work instead of killing them. So without further ado, let’s jump right in!

Is It Legal to Kill a Squirrel?

The first thing you need to consider when you’re thinking about killing a squirrel is whether it’s legal in the first place. In most cases, squirrels are considered a nuisance animal that can cause a lot of problems around your house.

For example, squirrels have an unmatched ability to create weaknesses and infiltration spots that allow them to sneak into your house, especially to reach your attic for shelter or live inside the wall. Additionally, they’ll typically chew on electrical wires, which causes huge malfunctions that may cost you an arm and a leg to fix.

Moreover, if you have a backyard garden, they’re capable of chowing down on chicken wire or other protections that you have set to protect your produce.

In most cases, shooting or killing a squirrel is usually legal if they caused some sort of damage to your property.

However, you may need a permit that authorizes humanely killing or trapping the squirrel. The legality of killing squirrels will also vary from one species to another. For instance, most states will allow killing red squirrels any time of the year. However, grey squirrels are usually protected by law and can only be killed in specific seasons.

Is Killing a Squirrel a Good Solution? The problem with squirrels is that they’re extremely opportunistic and will always hang around your property if they find it a good source of food or shelter.

Combine that with the squirrel’s outstanding agility and relatively high intelligence compared to other rodents, and you’ve got yourself one of the most difficult nuisance animals to deal with.

If all methods of deterring or scaring the squirrels off don’t work, the choice of killing them to end things once and for all is always a viable option, especially for the most frustrated homeowners.

While killing a squirrel is a decent solution, it’s not a walk in the park. Not only because they’re quite difficult to kill, but because killing an animal that you can simply fend off is typically frowned upon.

For that reason, you may want to only consider killing a squirrel after you’ve tried every possible method to deter them away from your property and you’re left with no other solution than killing them.

To help you avoid killing the squirrels as much as possible while still keeping them off of your property, we’ll also provide you with some suitable alternatives that won’t kill a squirrel but are highly efficient at keeping them at bay.

How to Kill Squirrels

Now that you know that killing squirrels should always be used as a last resort, let’s have a deeper look into the various methods that you can use to kill a squirrel if all other methods fail.

In the following section, we’ll review each of these methods to assess how effective they can be while showing the pros and cons so you can decide on the most suitable approach for you.

If you’re good at aiming, you might want to resort to shooting the squirrel with a gun or a bow. However, no matter how good a shot you are, hitting a small, elusive, and active squirrel isn’t as easy as hunting larger animals.

If you fail with the first shot, erratic shots at a panicked squirrel will only result in bullets or arrows that might ricochet and damage something or injure someone.

Here’s the best way to shoot a squirrel:

Despite being one of the first methods to consider while trying to kill a squirrel, poisoning isn’t the best way to do it.

For starters, there’s no official poison for squirrels, and just because they’re rodents doesn’t mean that rat poisons are completely effective for killing them, as they might not eat enough poison to make them die.

It’s also not humane or instant, so even if it manages to kill them, it will be a slow and painful death that might take up to 2 or 3 days after eating the poison.

Moreover, they’ll most likely retreat to an unreachable area, such as inside a wall, so they’ll produce a horrible smell that will permeate the house for weeks after they die. 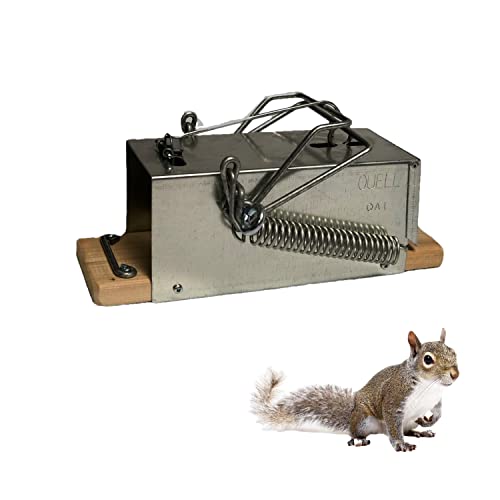 A large classic snap trap will be effective in killing a squirrel, as they’re basically a large mousetrap.

This one clamps down on squirrels with enough speed and force to instantly kill them. However, the success of the trap is quite inconsistent and depends on the squirrel’s approach.

4. Training Your Pet to Kill a Squirrel

There are many animals that are excellent at catching and killing squirrels, and luckily for you, some of these animals might be lying on your couch right now!

Retrievers will even bring back the carcass of the squirrel as proof of success if they’re properly trained!

The advantage of this method is that it happens on a daily basis in the wild, and it should be good training for the pet. It’s also a carefree method that will spare you the hassle of setting traps and the danger of handling poisonous chemicals.

There are two types of squirrels that are commonly found in North America. Most of them either dig burrows in the ground or live in nests in trees.

If your problem is caused by a ground squirrel, you’re mostly going to find some holes in your backyard, which is the main indicator of a squirrel infestation.

The best thing about carbon monoxide is that it’s a quick, reliable, and humane way to effectively kill a rodent. Of course, carbon monoxide can only be used outdoors because it’s toxic for humans, too, when they’re used in a closed room.

Simply attach a rubber coupler to your vehicle’s exhaust and use a pipe to lead the exhaust fumes to the entrance on the tunnel. If you’re sure that the squirrel is inside, get the hose inside and seal the rest of the hose with dirt, then run the engine without accelerating for 10 to 20 minutes.

Alternative Methods to Help Get Rid of Squirrels Now that you have a better idea about different methods to kill a squirrel, it’s time to take a brief look at some of the viable options that you should consider before resorting to killing.

While these methods have been tried by many and were found to be quite effective at getting rid of squirrels without killing them, results vary from one homeowner to the other, so you need to give them a try first.

These traps are simply one-way cages that will lock from the outside as soon as they step in. After trapping the squirrel, all you need to do is drive off far from the house and release them into the closest wildlife park or forest.

This should effectively push them to escape the radius of the noise for good. Your pets will hear that noise, too, which is the main drawback of this method.

It’s also the kindest and most humane method to get rid of squirrels in your house and many gardeners have claimed that it worked flawlessly!

This should also prevent your pets from jumping over the fence. However, cats are much more difficult to control than dogs in that situation.

If you’ve found the nest where the young are kept (which is usually in attics or minimally-accessed spots), simply transfer it out of the house and the squirrel will instinctively avoid going back to your house.

Squirrels, like other rodents, hate capsaicin (the main ingredient in spicy peppers), which should trick the squirrel into thinking that your product is unsuitable for them, which will push them to seek some other place to find food.

This wraps it up for today’s guide on how to kill squirrels. As you can see, some killing methods are just more practical and humane than the others, so you have to avoid the problematic ones and go for the quick and painless methods.

Remember, killing a squirrel must be a last resort solution after all other deterring methods fail to keep the squirrels out of your property. Always make sure that you’re following the law by inquiring about the legality of killing a squirrel in your house and whether you need a permit for it.