Have you heard of a game or sport known as pickleball? You may be wondering what it is and how it is played. The following information explains every aspect of the game including how to play it, rules, and strategies. 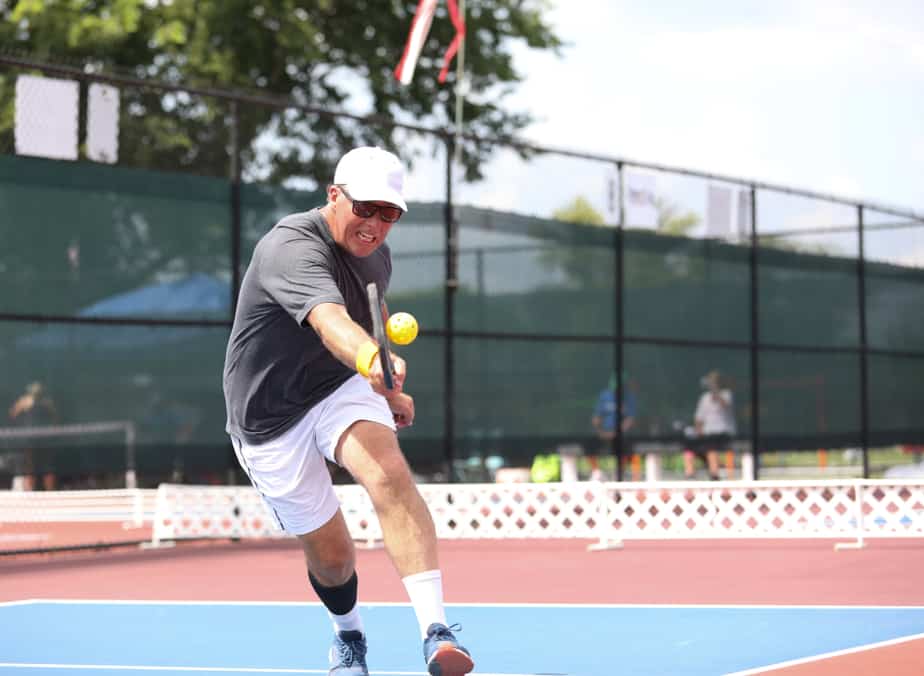 Pickleball is a really fun and realistic sport. Think of it as badminton meets traditional tennis, meets table tennis.

You have a lightweight ball (something similar to a whiffle ball), paddles, a court, and net. As players, you can face off as doubles or singles, the same way you would in traditional tennis.

Anyone from seniors to school-aged children can play pickleball. Since the court is smaller than a tennis court, the gameplay is usually less strenuous and compact.

However, due to the game’s none threatening nature, pickleball is one of the best ways to have outdoor fun. One of the perks is you won’t notice it is a great way to have fun while you exercise.

Although the game is played on a court, the rules closely resemble those of badminton or table tennis more than traditional tennis. So how does this work:

The game starts with one side serving the ball. It is done by using the paddle (larger than a ping pong paddle and usually wood or composite) to hit the pickleball (a hole covered, plastic, and light whiffle ball).

To properly serve the ball, one foot needs to be placed behind the black line. Now use an underhand swing to strike the ball.

Make sure you aim at the service court which is diagonally over the net. You should also ensure you clear the no-volley zone.

Service begins from the right-hand court. At this stage, only one fault is allowed.

If you are playing doubles, there is no fault. Each player gets to serve once. If they fail, the opposing team gets to serve.

Each side must allow the ball to bounce once before they hit it. The paddle is used to hit the ball at least one time from the beginning of the game.

Afterward, you are allowed to volley the ball (this means hitting it without it bouncing on the court). This works as long as you are not within the no-volley zone. It is within 7 feet of the net (it is marked on the court).

A team or player will score points only when they serve. A game is played to eleven points and winning must be by two points.

Just like tennis, the following moves are considered faults in pickleball. Each of these causes a loss of a point:

All you need to play the game is a net, a whiffle ball, and paddles. You can use sidewalk chalk to draw a court.

On the other hand, you can find official pickleball courts at many private clubs, community centers, and playgrounds (the game is gaining popularity). A pickleball court is usually a third the size of a regular tennis court. However, it is laid out using the dimensions of a badminton court which is 20ft by 44ft.

The court is divided by a net that is hung at 36” in height on each end. On each side of the net, there is a 7-foot area called the no-volley zone. It is marked with a line on the court.

The reason behind a no-volley zone is to ensure opportunities for drop shots or smash hits are not available. This makes the game more reliant on the cautious placement of shots.

Of course, this rule creates opportunities for each side to a fault. This adds to the fun of the game!

Why is it Named Pickleball?

Two predominant theories exist as to how this sport got its name. During the summer of 1965, a Washington politician known as Joel Pritchard and his two friends created the game to entertain his bored family.

According to the politician, Joan, his wife, described the game as something similar to the pickle boat in rowing. Pickle boat refers to a crew of oarsmen who are left behind by other boats.

The other theory is that the sport was named after Pritchard’s dog, which was named Pickles. The dog used to chase the ball and run off with it.

Pickles the dog, according to Joan, came around two years after the game was invented. Therefore, this means the dog was named after the game and not the other way round. However, there is a possibility the game was not given a formal name until the dog came to inspire it.

Where Can You Play Pickleball?

The growing popularity of pickleball has made it easy to find a place to play the game in every state across the United States. USAPA (USA Pickleball Association) has a list of all the names and addresses of locations you can play the game, organized by state. The sport is also gaining popularity in Malaysia, Singapore, Hong Kong, China, Thailand, Indonesia, New Zealand, Australia, Korea, Japan, Canada, and the UK.

There is a growing list of leagues organized through private clubs, YMCAs, and local recreational districts. To see if there is a league in your locality, begin by checking the USAPA list and then searching local directories. If there isn’t one in existence, you may start one!

If you have trouble finding a pickleball court, find a badminton court. Once there, lower the net to three feet.

Alternatively, you can create your court on any blacktop surface such as your driveway. Since you will not require a lot of space, it is easy to find a suitable place to create your court. All you need is to find a pickleball, paddles, and a net.

Introduce your colleagues and friends and you will be amazed at how much they will love the game. The reason why the number of tournaments, leagues, and courts increases each year is that more people are learning about the sport.

If you are a pickleball beginner, you may need to get some strategies to enhance your game. The following are some rules you should consider:

Pickleball is not a hard game to play. The good news is you do not have to go deep into your pocket to play it. All you need is a net, paddle, and a ball. If you do not have a court, you can create your own. The above information is sufficient to teach anyone how to play pickleball.