This popular lawn game has come a long way from its associations with afternoon tea and the subject of bucolic paintings, such as The Croquet Game, by Édouard Manet. When learning how to play croquet, you’ll find several variations and regional differences. Ready to run a hoop? Break out the wickets and the mallets!

Why You Should Learn How to Play Croquet

Croquet might not be the first backyard game you think of when deciding what to do. However, it has all the elements for a fun, summer afternoon. Its leisurely pace is the ideal way to enjoy the competitiveness in a non-contact sport. Both children and adults can play, so everyone can get in on the action.

Although it’s not a major calorie burner, croquet still offers a chance to move around and enjoy the day. The rules are easy to learn, making it an excellent choice for beginners. A croquet set is affordable too. Let’s begin here to learn how to get started.

The standard set contains everything you’ll need for gameplay. It typically includes:

Most also have a carrying case for storage. You may also get metal clips to mark your next wicket and a deadness board. We’ll discuss the latter in the gameplay section.

The preferred material of the United States Croquet Association is wood. You can use others as long as it doesn’t give you a competitive edge. Adult models are usually 36 inches long.

Your run-of-the-mill set has molded hard plastic balls. If you wanted to use regulation ones, look for ones that weigh no more than 16.25 ounces and are 3 5/8 inches in diameter. The approved colors for four-player games are blue, red, black, and yellow.  Green and orange are permitted for three team matches.

Most commercial sets have steel hoops. Regulations call for 12-inch iron wickets that are 5/8-inches in diameter. White is the standard color, with a blue crown or top for the first one and red for the last.

The placement of the stakes depends on the game you’re playing. Regulation ones are 18 inches long with a diameter of 1.5 inches. The base is white with bands of white with blue, red, black, and yellow bands from bottom to top.

We’ll start with the sizes, which vary with the game you play. Of course, the size of your yard has the final say. Start with an area that is relatively flat and free of obstacles. However, it’s not a hard-and-fast rule if you want to add a challenge.

The dimensions are as follows:

You’ll find it helpful to mark the area with string and stakes or spray paint. Boundaries play a role in gameplay. The standard size is five units long by four units wide, whether one equals 5 feet or 10 feet. The proportions are the key.

How to Play Croquet

We’ll begin with the standard gameplay and then move on to the variations both in the United States and abroad. While the rules may sound complicated, they are logical when you put them in context.

The object is simple: get your ball through all the wickets in the right order first to win. Note the mention of the sequence. It’s also essential with the color ball you have. The striking turns go from blue, red, black, and yellow, like the tops of the stakes. 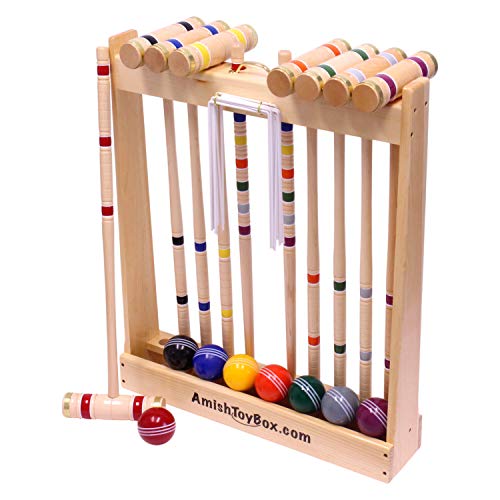 Setting Up the Court

Place one stake in the center of the outlined court, both horizontally and vertically. You’ll place three wickets on each side. Put one on the left and right side, one unit from the bottom and one from the side. The units refer to the measurement you used for your court. The center wickets go one unit down from the center stake.

The end where you start is south, and the opposite is north. Your left side is west and right, east.

The sequence of wickets is number one, the one on your left and closest to you on the southwest corner based on the wicket placement. The others are as follows:

The gameplay is going through each wicket in this order and then going back in the opposite direction, finally striking the stake.

Toss a coin to see who goes first, the order of play decided by the color ball they choose. You can play with two or four players, with one or two balls each (blue-black or red-yellow in this case), respectively. Each player or striker starts with one turn to try to get their ball completely through the wicket.

Sound easy? Well, there’s a bit more about learning how to play croquet that you need to know too.

Other Parts of the Game

Let’s start with boundaries. Some variations call for a penalty. For this version, your turn ends.

If you hit one of your opponent’s balls, you’ve made a roquet. That entitles you to a croquet stroke, hence, the name of the game. You then can place your ball next to the other and strike both at the same time. That allows you to put your opponent’s in an unfavorable position for running the next hoop.

You also get a continuation shot from wherever your ball ends up landing.

The one condition with a roquet is that the ball you hit is off-limits until you score again. In croquet lingo, that means you’re dead on that ball. The deadness board keeps track of everything. You also cannot get a roquet or a point on the same play. The same thing applies to hit the stake too.

While this game is fun, you can also play some variations on the game, which are as enjoyable and make gameplay more challenging. Two of our favorites are nine-wicket croquet and golf.

A lot of the same rules apply. However, there are some differences that you must know.

As the name implies, the primary difference is the number of wickets. That means the pattern on the court varies too.

Instead of the two open triangles, there are two diamonds that line up in the center, one on top of the other. The two stakes are at the center of the north and south ends, with a wicket placed in front of it going toward the center and the bottom of each diamond.

Gameplay begins at the south end of the court. The order goes clockwise following the east side of the diamonds, at the northern stake and going along the west side back to the southern stake.

This game introduces some fun additions, starting with the rover ball if you’re playing in teams of two. If one of you gets through the hoops first, you can suspend the end of the match by striking the stake and play spoiler instead. You can go for a roquet shot until you get hit. Then, you’re done, and your ball goes off the court.

You can also play a cutthroat version called a poison ball. In this version, you can hit other balls as the rover and take them out of play. You cannot go through any hoops or you’re out of the game. If you get hit, you’re done too. The last player on the court wins the match.

We like this variation because it ramps up the competitive level and takes croquet to the next level.

The combination of croquet and golf is a natural one. While the previous variations are favorite American games, this one has a following on the international front. The United States Croquet Association also has some set rules and regs for it.

The setup is identical to the six-wicket croquet with the same number of hoops and the same pattern. Gameplay follows the same order forward and back too.

The difference is that you win if you score seven points first. The object is to be the first player to run the hoop. Then, you get the point. It’s not unlike skins where one person wins the hole. Everyone has the same objection, which adds to the excitement.

The game has one devilish twist.

If your ball goes more than halfway to the next wicket outside of your stroke or an opponent’s action, it becomes an offside. Not good. That means your teammate can put you in a penalty area, time out, if you will, on either the west or east boundary.

Mixing Up the Rules

The rules regarding how to play croquet are clear-cut. However, you also have some wiggle room for customizing it. For example, you can set different conditions for going out of bounds. If you have an obstacle on your site, you can make it a focal point with an additional turn or strike that the players have to make.

You can also add time as a factor. You can set limits for the shot or even on the game to make it more exciting. How about adding some points? While we’ve talked about the usual thresholds, you can double them or even triple the amounts to extend gameplay.

From Canada and Beyond

While the origin of croquet isn’t certain, it probably had its start in Europe in the 1850s or perhaps even earlier. The versions we discussed have an American flavor. But, they aren’t the only way to play this backyard game.

Garden croquet, for example, is a British variation is similar to the six-wicket, American croquet with rules set by the World Croquet Federation. It is a popular bridge between the casual match you’d play with friends to the competitive games where the stakes are higher.

Ricochet is Australia’s version with different rules with its own organization calling the shots.

Ways for Learning How to Play Croquet

Croquet isn’t just about striking your ball with just the aim of bumping your opponents out of play. That’s one way to do it. Like golf, it’s about strategy and control. You need to learn how to read the course to gauge your strokes. Your technique is vital. Less is often more.

Your grip is also critical to a well-aimed strike. The standard position is to grab hold with your left hand on the top of the mallet, assuming you’re right-handed. Place your right hand on to the shaft with your figures pointed down. It’s a comfortable way to hold it that reduces strain. It also gives you control.

Putting a spin on the ball by hitting it low is another useful way to control its roll. You can get the strike on point and keep it from going somewhere you don’t want it to go after the attack.

You should also practice striking more than one ball as in a roquet. It’s better than figuring it on when you’re on the job, as it were. Learn to gauge the ball strike with the effect on your and the other ball you’re hitting. That’s where the material makes a difference too.

Regulation rules specify that they cannot have a bounce between 30 and 45 inches when dropped from 60 inches. Considering the surface on which you’re playing, it’s a moot point, anyway. 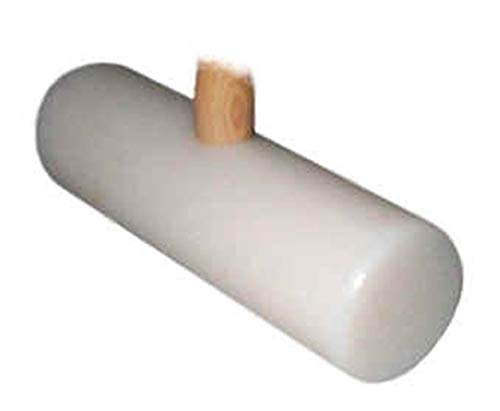 Speaking of rules, if you want to compete, we’d suggest buying regulation equipment and learn by using them from the start. Commercial products are a far cry from what you’d use on the court. While we touched on the specs, you’ll find quality equipment can have a profound effect on the gameplay. We’d recommend ponying up, especially when it comes to the wickets. After all, they take the hits.

The great thing about croquet is that it’s a global connection. Even with the variations, it’s a game that anyone can appreciate. The rules aren’t difficult, especially if it’s casual gameplay. It crosses international boundaries and age ranges, seamlessly.

Old or young, American or not, learning how to play croquet is an excellent way to make new friends no matter where you call home. Getting active and enjoying some quality time outdoors is priceless.