Croquet is unique in that it straddles two wide arenas. It is a classic game with its origins dating to the 1850s. That gives it a certain je ne sais quoi that modern games lack. The sport has also made a splash on the competitive front with the rise of clubs and leagues that appeal to other demographics. It was even an Olympic event at one time. The sports industry has noticed too.

Croquet has evolved from the cheap wooden mallet and plastic balls to equipment that is an asset to the serious player looking to compete. They conform with the United States Croquet Association’s (USCA) regulations to make the gameplay fair and more predictable for the serious player.

The thought of croquet invokes sophistication, which, in turn, means order and rules. It gives the sport a classy quality that is part of its allure. It is much more than just hitting balls through wickets. 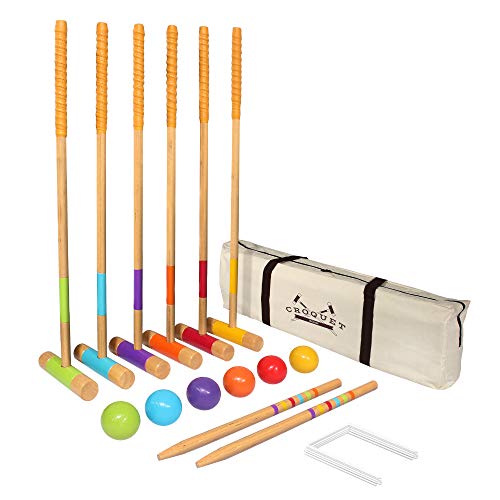 Croquet Rules for Equipment and Accessories

No matter what croquet rules you follow, the equipment is the same. You need a measured court with specifications about the placement of other elements of the gameplay. The purpose is to even the playing field.

Everyone starts at the same level. The regs remove the biases that may come on board under certain conditions or terrains. That factor is essential no matter what version of the sport you play.

The other things that are critical for croquet rules include:

Let’s discuss the regs of each one.

Iron is the traditional choice for wickets or hoops. The rules specify that each one is 12 inches tall and no more than 4 inches wide. Most of them are white. However, the first one in the game is blue across the top or crown. The last one is red. The difference helps players know the direction in which they are playing.

You’ll often see the differences between casual and professional play often when looking at this piece of equipment. Recreational croquet sets typically don’t conform to the regs, which are precise. Official rules specify the diameter, weight, and bounce height of the balls.

You won’t find croquet balls in a range of colors. Instead, there are four—or sometimes six—approved shades. They are blue, red, black, and yellow. You can also use green and orange if you’re playing with six balls.

The primary focus of these croquet rules rests with the mallet head. It is, after all, the business end, of the equipment. The main objective is that there is nothing in its construction that will give a better competitive edge over wood. Interestingly, the rules are less specific with mallets than other items like balls.

These items also have specifications on diameter and length. There is also a set of regs on the coloration. Allowed stakes are 18 inches long with a diameter of 1.5 inches. The bottom 6 inches are white with bands of blue, red, black, and yellow going to the top. The order is the same as the gameplay.

The other permitted items will help everyone keep track of the progress of the game. They include: 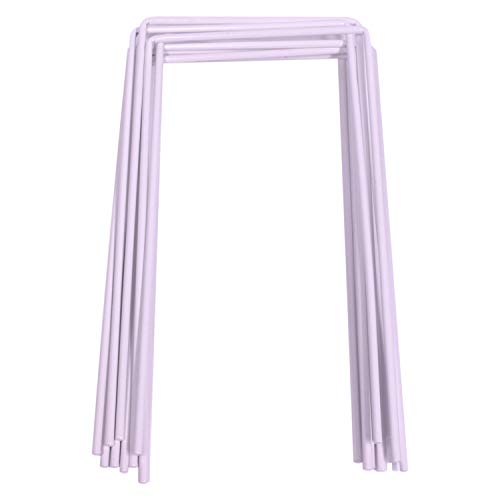 The regulations differ, depending on the variation in which you are playing. The standard size for both American Croquet and Golf Croquet is 105 feet long by 84 feet wide. That gives it a ratio of 5:4 units, in case you need to scale down the size. Be sure to keep it in those proportions.

The side at the bottom is south, no matter what direction it actually is. The far side is north with the left, west and right, east.

You’ll use one stake, which you will place in the center of the court. The placement of the wickets depends on the size of the playing field. You’ll put three on each side in a triangle with the point facing the stake. They should be an equal distance apart on both sides.

We mentioned the order involved with croquet earlier in this article. It’s an essential part of the game since you need to go through each wicket in a set sequence. That’s part of the challenge. Players begin at the first, blue-topped wicket in the southwest corner of the court.

The person with the blue ball starts. If you’re playing one-on-one, you should also have the black one. Your opponent will have the red and yellow ones so that you can alternate back and forth.

You must hit your ball completely through the wicket to score a point. You have only one shot per turn unless you get extra ones. If you miss the ball, your turn ends. Likewise, if it goes out of bounds, you must place it 9 inches from where it went out of play.

You cannot strike your opponent’s balls with your mallet. Sliding or using another part of the mallet is also not permitted.

The sequence of the next wickets by their placement on the court is:

That’s the first run through the hoops. Then, you must go back. The order is:

Here is where skill—and luck—enter the game. If you go through a wicket, you get another turn called a continuation shot. There’s another way that you can get one, which ramps up the competitiveness of the match.

If you hit another opponent’s ball, pat yourself on the back because you just made a roquet. That earns you a croquet shot. According to USCA rules, you can then take your ball and place it next to your opponent’s. Then, you can strike both of them with one swing.

Neither one should go out of bounds. However, you’ll then get your continuation shot. Also, you cannot strike the same opponent’s ball again until you’ve gone through your next hoop. In croquet lingo, it means that you’re dead on that ball. That is what the deadness board tracks.

But, there are a couple of conditions. Both you and your opponent must have scored their first wicket. Otherwise, it doesn’t count and no extra shot. Also, it’s either a roque or score but not both. While yours can go out of bounds, your opponent’s ball cannot.

After all, that’s why there is a delineated court.

As we mentioned with the sequence, the final point is when you strike the stake. If you’re playing one-on-one, don’t hesitate to get it and win the game. You might reconsider if you’re on a team. That’s where the rover ball enters the match.

Once you hit the stake, you’re done, and your ball leaves the court. If you delay the strike, it becomes the rover ball. Here is where you can wreak havoc with the other team. You can continue to make roquets to give your teammate a chance to run some more hoops.

Bear in mind two things. Your opponents can knock your ball out of play if they cause it to hit the stake. The second thing is that you can only make a roquet on the others once. You’ve gone through all the wickets and scored already.

American or six-wicket croquet is just one way in which you can play this backyard game. There are two other versions that are quite popular in the United States. Each has some slightly different takes on the rules that you’ll need to know.

This version makes sense since most recreational sets have nine hoops, anyway. The size of the court is different to accommodate the extra wickets. It is 100 feet long by 50 feet wide instead of the standard size.

The wicket placement varies too. You’ll put a wicket in the center of the court, which is one point for the two stacked diamond shapes going the length of the playing field. There are also two stakes at the center of the south and north ends, each with another hoop in front of it.

The sequence starts at the blue-topped wicket placed in front of the south stake. You’ll then follow the outline of the diamonds going counterclockwise along the east side. The north stake is the turning one, which you’ll strike to earn one point. Then, it’s back to the starting point, down the west side.

The other rules with making a roquet and scoring extra points apply with nine-wicket croquet too. We should also point out that the setup of the wickets can make it easy to score two hoops at the stakes. However, the USCA rules state that you get only one continuation shot and not two.

Since most sets will have six balls, you can use all of them for this variation. You’ll play the balls in the same order, adding green followed by orange. The blue-black team gets the former and the red-yellow team, the latter.

If you want to mix things up, you can make the rover ball a poison ball, instead. The player with the poison ball can make a roquet on others. However, any hit balls go out of the game. Likewise, opponents can remove the poison ball if they strike it or if it goes through a hoop.

Maybe it’s because the mallet resembles a club that this take on the game exists. If you like the gameplay of golf, you’ll love this variation. The court and wicket setup are identical to American Croquet with one key difference.

There are also two penalty areas located on the east and west sides of the court at the center. These semi-circular areas come into play with another rule, offside balls.

The gameplay begins anywhere within 3 feet in the southeast corner. The sequence is the same as American Croquet. However, instead of every player getting a point for running a hoop, only the first one to do it scores. In some ways, it resembles the match play of the Ryder Cup.

If you hit an opponent’s ball through the wicket, they get the point, not you. The one closest to the score gets the point if two go through it. The first one to get to seven wins the game.

Now, let’s talk about the Halfway Rule. Let’s say you score a point with a stroke. Any ball that is less than half the distance to the next wicket in the sequence is an offside ball. That doesn’t include ones that were hit by the opposing team or what you just played.

If you own the offside ball, your opponent can put you in the penalty area of their choice. They can also tell you which way to shoot to leave the area on your next turn.

It makes sense when you think about it. After all, if your opponent’s ball is in the way of your next shot, it’s interference.

If this game sounds competitive in the first order, you’re right. It’s no surprise that there is a Golf Croquet World Championship. 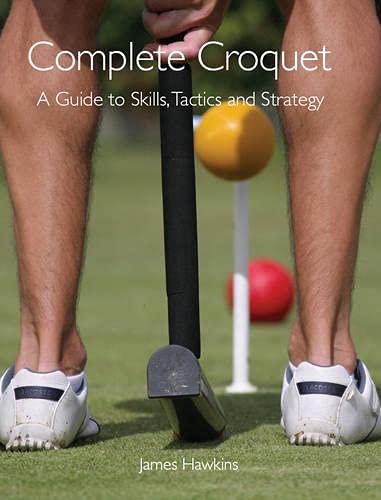 Complete Croquet: A Guide to Skills, Tactics and Strategy
SEE PRICE ON AMAZON

While they may sound complicated at first, croquet rules make sense. Running the hoops isn’t as much of a challenge if you’re going in any direction. The sequence of wickets demands skill and a strategy to succeed. The otherwise leisurely pace of the game ramps up the action and excitement when these cards are on the table. If one thing is certain, you’ll likely see more variations of this backyard game.