Airsoft games are very fun and interesting. If you want to improve your game experience, you may need a few accessories. Some people prefer playing a full tactical game inclusive of an airsoft smoke grenade. If you are such a person, you will need to find a list of the best smoke grenades for airsoft on the market. We have come up with a list of products we found to be good for playing airsoft.

Product prices and availability are accurate as of the date/time indicated and are subject to change. Any price and availability information displayed on [relevant Amazon Site(s), as applicable] at the time of purchase will apply to the purchase of this product.

Prices pulled from the Amazon Product Advertising API on:

This pack of 6 colorful pull-ring smoke tubes is perfect as a distraction on the airsoft field. You receive 6 rainbow colors including pink, white, purple, green, and orange; and each runs for approximately a minute and a half — just enough time to get the shot in or sneak away from rivals on the other team.

It’s worth noting that these smoke tubes, along with any other, should not be used in an indoor airsoft arena. After you pull the ring, throw it in the direction of the rival players and do not touch it until either the game is over or when it has completely released all of the smoke. The tubes do emit some heat.

They also emit a somewhat unpleasant (but not overbearing) odor, although it’s not toxic or harmful to people. If you don’t want all of the colors or need a specific color for your team to identify, you can message the seller and they will customize your pack of 6. 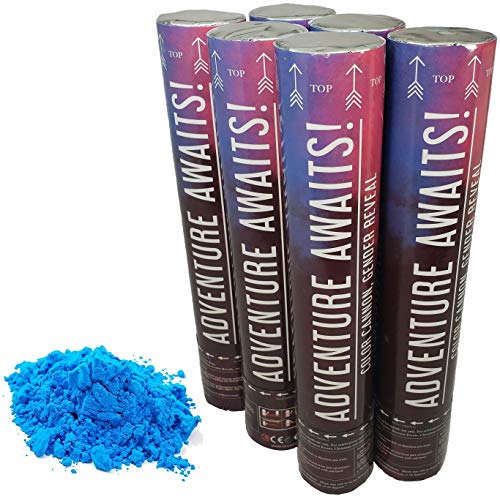 Available in baby blue, pink, or a multicolored option, these color dispensers are a 6-pack full of color and fun. This is a “twist and pop” option, rather than a pin-pull option, so it’s still an incredibly easy smoke device to use during an airsoft game.

The ingredients used are a natural and biodegradable cornstarch powder, so these smoke grenades won’t harm the players and won’t leave a mess on the airsoft field. Though this is made with safe ingredients, it’s still manufactured for outdoor use. Avoid using indoors unless you’re inside a large, well-ventilated airsoft facility.

These are slightly less effective than the other options on our list, as the smoke — though thick — will only linger in the air for around 30 seconds to a minute (at the very most). It’s definitely a “getaway quick” option if ever you or your team get in a sticky situation on the field. 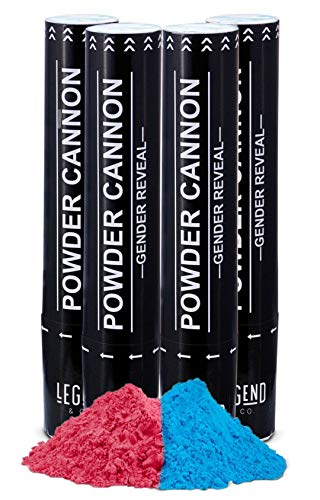 With over 400 positive reviews, the Legend & Co. Powder Cannons are a go-to option for airsoft smoke devices. Four cannons are included in two pinks and two blue colors. Like the previous set of cannons, the powder is biodegradable and dissipates, so there’s no cleanup necessary.

However, these are best for short distractions — either to get away or quickly charge an opponent on the airsoft field, as the powder doesn’t linger in the air for longer than 30-45 seconds (depending on the weather conditions and wind speed) at most. On the bright side, the color is very bright and distracting and the plume of smoke is pretty large. 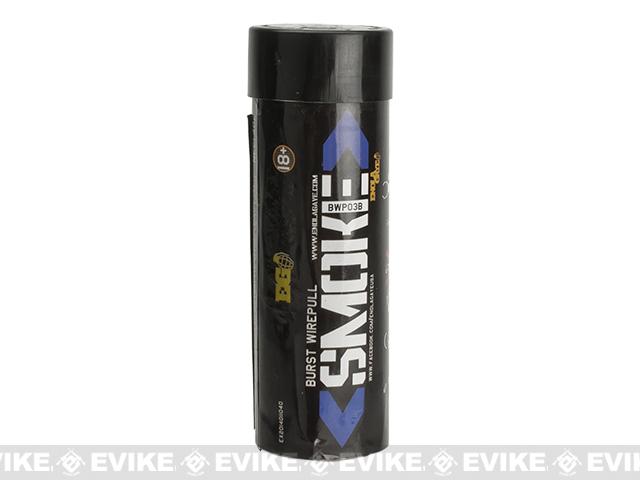 From one of the most renowned airsoft shops in the United States, this Enola Gaye Airsoft Wire Pull Smoke Grenade is a must-have for the serious airsoft player. It’s available in nine different colors including blue, white, pink, orange, green, black, yellow, purple, and red; and features a thick cloud of smoke that lasts approximately 30 seconds or longer.

The wire pull mechanism gives an extra inch of that realistic feel on the airsoft field, and the smoke exiting from both ends of the grenade helps it to disperse evenly, temporarily blinding the senses of your opponents.

Overall, Enola Gaye knows what they’re doing. So if you want an airsoft-centered option, this may be the way to go. 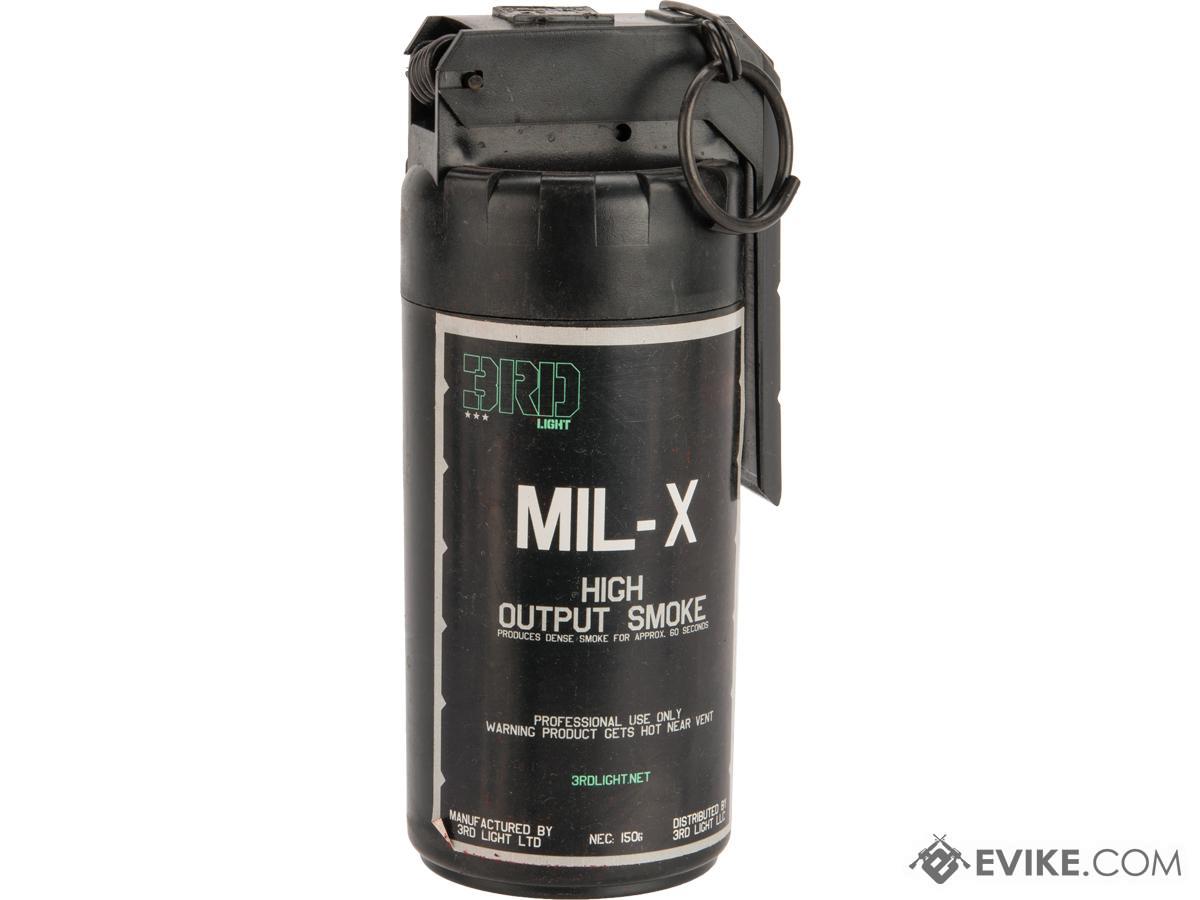 Yet another Evike product, this smoke grenade has a realistic appearance to that of authentic military and law enforcement devices. It’s available in 5 different colors and has an impressive burn time of 1 minute so that your opponents on the airsoft field are incapacitated whenever they’re in the line of fire.

It releases a very thick plume of smoke with bright colors to distract and temporarily blind your rivals so that you can make your move. The military spoon-style ignition mechanism adds another touch of realism to this puppy and is surprisingly simple to operate.

Unlike the previous Evike smoke grenade item, this smoke grenade only dispenses smoke from one end of the tube, though it won’t negate its effectiveness.

Choose from white, green, blue, orange, purple, or red smoke and watch in satisfaction as you and your team take over the match.

Before you purchase any smoke grenade, there are several factors you need to consider. These factors will determine the best type of smoke grenade for your needs.

The type of smoke emitted is another thing you should consider. For instance, windy areas will require a smoke grenade with heavy smoke. This is because the wind tends to clear the smoke faster than you would anticipate.

Color is another important factor to consider. Try and get a color that matches with your airsoft game outfit. This way, the smoke will help to increase your cover or alert your team.

The location is also a crucial factor to consider. In this case, we are talking about whether you are playing indoors or outdoors. Indoor game parks require light smoke since the smoke will not be affected by wind and other external factors.

An airsoft smoke grenade produces harmless, bright-colored smoke to create smoke screens for airsoft games. They are great as protective shields from opponents and they produce smoke that lasts from approximately thirty seconds to 1 and a half minutes. These smoke grenades cover outdoor areas of about 30,000 cubic feet to 500,000 cubic feet.

The two types of airsoft smoke grenades are flameless and standard. The latter are ignited manually and give 30,000 cubic feet to 100,000 cubic feet.

Smoke comes out in bright orange colors and can last up to four minutes. To set off a smoke grenade, you need to pull the pin.

As for the flameless type, a battery using 9 volts of power is used to ignite the grenade. They are best used for large smoke screens that can be ignited remotely.

If you want to purchase airsoft smoke grenades, go for one that meets your needs. Time limits vary from one make and model of a smoke grenade to another.

This means you need to search for one that gives you the exact or approximate duration you want it to last. When it comes to smoke range, get one that fits the area you are using to play.

30,000 cubic feet of smoke should be sufficient if you are in a small airsoft field. Larger fields will need grenades that cover as much as 500,000 cubic feet.

You may find you want a smoke grenade that covers large areas and lasts for a long time. Going for one above of what you require is not ideal. It may make your strategies fail or backfire on you.

Hype up the Game

During an airsoft game, using some airsoft smoke grenades can make your game more realistic. After all, today’s games are not only about airsoft BBs.

Mines and bombs are used in realistic battlefields. This means airsoft grenades will come in handy whether you use them for protecting a base or concealing an attack.

Of course, lethal explosives are not allowed in any airsoft game. Since these games are simulations of realistic military situations, players can use replicas of claymores, mines, grenade launchers, and grenades.

Take note these gadgets do not contain any live explosives. Citric acid and green gas are commonly used to power these weapons.

Enola Gaye is the longest-serving pyrotechnic company in Europe. It manufactures pyrotechnics for the airsoft and paintball industries.

Founded in 1996, the brand had an idea to manufacture a pyrotechnic paint grenade that was biodegradable and similar to the real grenade. The idea was to develop a product using paper pulp that looked like an egg box.

Previously the company was known as Astra Fireworks. It offered a similar pyrotechnic made using polystyrene and it was painted black.

The product blasted into many white pieces that were un-biodegradable. This did not work for paintball fields and parks looking to keep their lands tidy.

This is the company in charge of manufacturing Empire BT m8 and M12 airsoft smoke grenades. Evike has been known to offer its consumers the perfect experience.

To achieve their vision, they have vowed to be the most respected and successful business in America. Evike is the leader in the paintball and airsoft smoke grenade industry due to their hard work, willingness to invest back into the industry, vision, integrity, thirst for perfection, and dedication to their customers.

For more than ten years, the company has been the global developer, innovator, leading distributor, and most trusted brand of airsoft equipment. They are also the exclusive maker, service center, and representation of many of the premier airsoft brands in commercial, training, and sports markets.

At Evike’s core, a personal touch, safety, innovation, and passion for quality in customer support makes them second to none.

The company has an international array of strategic partners that spans the globe. Countries included are South America, Europe, Japan, Taiwan, China, Hong Kong, and the United States. They are proud to have the largest showroom, airsoft convention, warehouse, high-end airsoft distribution network, and largest staff.

Q: Is it legal to own a smoke grenade?

A: As long as you are above 18 years old, it is not illegal to use them. It is also not illegal to buy them. Just seek permission or use them on your land.

If you cause a disturbance or panic, then you are certainly breaking the law. It is advisable you use discretion, get the necessary permissions, or use them where they are not restricted.

A: Yes. Airsoft smoke grenades do have somewhat of an unpleasant smell, however, it’s not unbearable.

Q: What Is The Average Duration Of A Smoke Grenade?

A: On average, a smoke grenade will last a minimum of around thirty seconds and a maximum of a minute and a half (for the most common devices).

Q: Can you Transport Airsoft Smoke Grenades on a Plane?

A: Smoke grenades, especially those used in airsoft games, are not illegal. However, they are prohibited from being brought onto an airplane. The main reason is the smoke may be accidentally released and fill the cabin. This may in turn cause panic among the passengers and crew. Additionally, it may enter the cockpit and disorient the pilots.

Q: Do Smoke Grenades Get Hot?

As such, the casing of the grenade may get a tad warm. However, you shouldn’t get burned by an airsoft smoke grenade that you set off.

Well, there you have it! Our picks for the best smoke grenades for airsoft.

For determined airsoft players or those who prefer realism, we recommend Enola Gaye smoke grenades. These are of better quality than the rest. If you feel they do not meet your standards, the other option would be going for the 6-pack Colorful Smoke Tubes.

From the information above, you should be able to choose a good airsoft smoke grenade. Use our well-researched education to help you understand all things smoke grenades.

Airsoft grenades are a great addition to any airsoft game. Using them will give you a better experience during gameplay. Make sure you use smoke grenades in designated areas such as airsoft game parks.