From the Three Little Pigs to Babe and Wilbur, pigs have long been beloved characters from our favorite books, cartoons, and films. So it’s no surprise that fans of these cute little piggies would want their very own porky companion. In this article, we’ll be going over everything that you’ll need to know about how to raise a pig in your backyard! First and foremost, it’s time to study up on your local laws. Determining whether or not it’s legal for you to own a pig where you live is the initial deciding factor. In some places, it’s illegal to own a pig if you reside within city limits. In others, you may own a pig if you live in town, but with restrictions.

At the absolute minimum, your pig should have at least 10 square feet of space to walk around in – but we don’t necessarily recommend this. When it comes to farm animals, the larger your yard, the better. If you live in the suburbs and your yard is big enough for a medium to large dog, then you should have adequate space to raise a single pig.

On the contrary, if you live in the country, you should spend more effort on providing a larger pen for your pet pig. A pen that is half an acre to an acre would be a wonderful enclosure for a pig to walk and roll around in – and you could possibly add a couple more pig companions to the area later on, down the road.

3. Shelter for Your Backyard Pig

As with any animal, pigs need shelter to keep them from being exposed to harsh environmental elements and potential predators. Pigs are woefully sensitive to extreme weather conditions, whether it be heat spells or freezing temperatures. It’s imperative that you provide them with a stall that is well ventilated for hotter days but can protect from wind and snow during winter.

Pink pigs are also sensitive to overexposure to the sun and can get sunburned quite easily. These types of pigs will need shade from trees, as well as a manmade shelter.

Overall, the perfect shelter can be achieved with a simple 3-walled shed or small, enclosed barn if it’s feasible for you. Though, in the winter, you may need to take extra precautions to keep your pig toasty. Which brings us to our next “how-to”…

Providing your pig with enough bedding will help keep them warm and comfortable as they live their lives in the Great Outdoors. Pig bedding usually consists of large clumps of straw gathered in one corner of the stall.

Unlike horses, cows, chickens, goats, and creatures of the like, pigs are relatively clean animals (despite how they’re often portrayed in the mind’s eye). When a pig’s bedding is placed in one corner of their living area, they will avoid messing their resting place up with waste. Instead, they’ll head elsewhere to use the piggy porta potty.

This is good news for both you and your pig pal since you won’t have to replace their bedding every day and they won’t be awoken from their nap as you do so.

Despite what many may think, pigs are actually relatively smart creatures and will easily slip through improper fencing. If you decide to keep your pigs in a small enclosure of approximately 10 square feet (which we don’t recommend – especially for pet pigs) then your best bet for fencing may be hog panels.

Alternatively, if you decide to house your pigs on more land, an electric fence will be less costly, look more visually appealing than hog panels, and will effectively deter your pigs from getting too close to the perimeter of their enclosure.

Of course, both fencing methods are highly effective at keeping pigs where you want them. It mainly comes down to personal preference.

The following fencing does great when paired with a wooden frame: 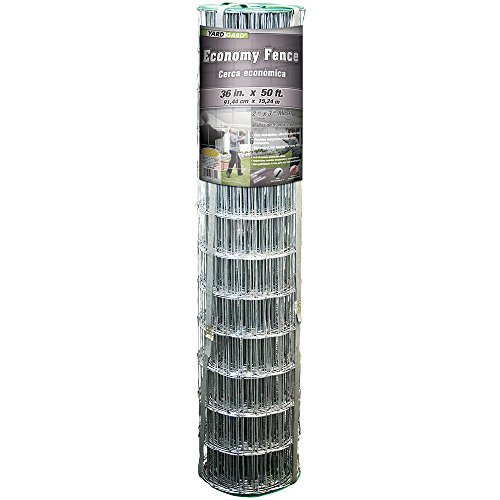 Pigs are gluttonous creatures. And whenever they eat, they bring a whole new meaning to being in hog heaven.

These chubby little fellas will quite literally eat everything they can get their stubby little snout on including both meat and plant products. They’ll even eat garbage if they find any lying around. But just because pigs are opportunistic eaters, doesn’t mean that they should eat anything and everything.

A healthy diet is just as important to your pet pig as to any other pet, though they may be unique in their ability to process otherwise harmful food items. A diet that is high in fiber and low in meat and sugar is the best.

Fruits and Veggies for Pigs

As we mentioned above, a diet consisting of low sugar is most beneficial to pigs. So whenever you go to feed your pig expiring fruits, be sure not to load them down with fruits consisting of high sugar content.

Here are a few fruits and vegetables that are okay for pigs to eat:

Because buying fresh fruits and vegetables can definitely get expensive, you can choose to include pig pellets into your pet’s diet to save money. Generally, any type of pig feed will do for domesticated pig species. However, there are some feeds that are specifically made with different types of pigs in mind (Potbellied pigs and Mini pigs, for example – we’ll go over these in more depth, later on).

A great feed for Mini pigs, and for domesticated pigs overall, is the Modesto Milling Organic Pig Feed: 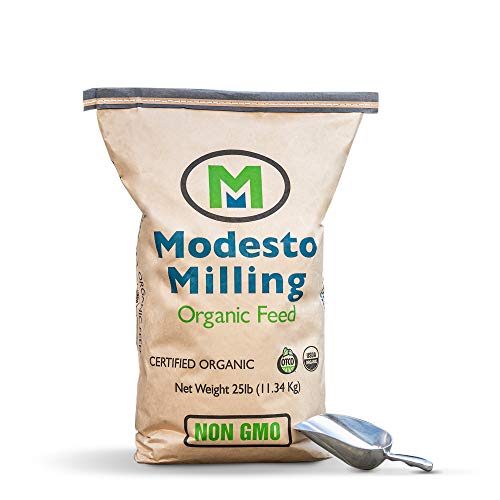 Another feed we recommend that is especially good for Potbellied pigs is the Manna Pro Potbellied Pig Feed: 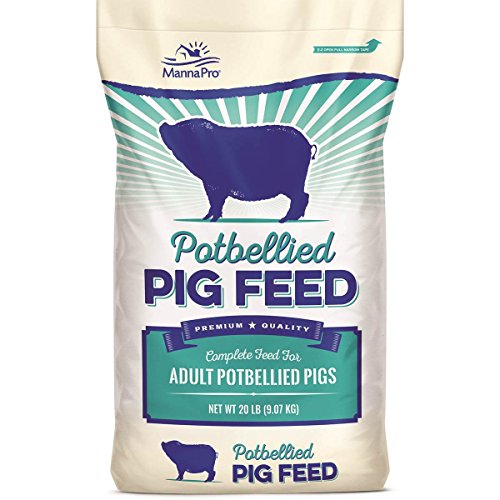 And if the above two choices just don’t cut it for you, you can always locate and purchase an ideal pig feed at your local farm supply or pet supply store.

It goes without saying that domesticated pigs need a designated area for their food and water.

Troughs can be used for both water and food and are generally positioned on the fence or placed on the ground. Be sure, especially during extreme weather conditions, to clean and change the troughs often to avoid algae, mold, or other unappetizing results of slacking upkeep.

We recommend troughs that can be clipped or screwed onto fencing. This ensures that the troughs can’t be scattered, tipped over, or contaminated by feces, mud, or anything else that a pig’s body may introduce to a low-lying feeder or waterer.

This pack of 2 troughs (for food and water) is our favorite: 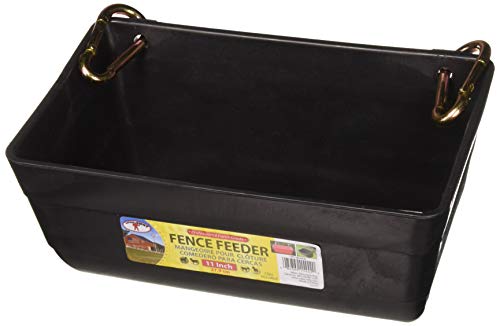 A Word of Warning

Though pigs look adorable and harmless as they chow down, they’re actually extremely dangerous if you get too close. Not so much concerning attacks or aggressive behavior, but rather because pigs are ravenous when they eat and won’t mind if they’re chewing on a carrot or your finger.

There have been cases of farmers losing their fingers by putting their hand too close to the trough while the pigs were eating, so be wary of your surroundings as you pour slop or pig pellets.

Like every other pet, pigs will need access to veterinary care. They’ll need shots and to be put on a deworming schedule just like a dog or a cat, so expect to spend a decent amount during your first few vet visits after picking up your piglet.

You should also consider whether or not you should spay or neuter your pet pig. If you have more than one pig of the opposite sex, we highly recommend that you spay or neuter them when they’re of a safe age to avoid any unwanted litters.

Keep tabs on your pig’s veterinary visits and health records just in case you need any medical information for unexpected future vet visits due to sudden illness or injury.

8. Should You Raise a Pig Indoors?

Pigs can actually do very well when raised indoors. They can use a doggy door to go outside or alert you whenever they need to go out, they can eat and drink from indoor troughs, and can even sleep in a large kennel as any dog or other common indoor pet would.

Of course, all of this comes from training (like you would a dog) and may take some time for them to get used to not using the bathroom in your home, learning commands and where to go when they want out, and so forth.

Overall, this is another one of those things that fall down to preference. Pigs are relatively clean animals and don’t have an overwhelming natural odor so many people do decide to keep them indoors. However, they do fine outdoors, as well. You could even leave them outside for the most part and bring them in at night or during the winter.

9. Choosing Which Pig is Right for You

In general, there are two types of pigs that make the best pets; they’re the Pot-Bellied Pigs, and Kune Kune Pigs. Let’s take a look at each individually: Pot-Bellied Pigs are super chubby and cute (and our favorite, if you couldn’t tell). They’re quite docile and do well when raised around other pets and farm animals and can even do well indoors alongside dogs and be potty trained.

Pot-Bellied Pigs are also quite small in size compared to pigs used for meat, which can get up to 600 or more pounds; weighing at approximately 100 pounds. They have short legs, and their bellies hang close to the ground for their entire adult lives, and if your pig happens to become pregnant, her belly may even drag the ground as she walks. Noted for their odd, but adorable, coloration, KuneKune Pigs are the second type of pig most commonly used as pets.

Their coloring varies more widely than Potbellied Pigs and includes black, cream, spotted, brown or red and their hair can be straight, curly or wavy in texture. They typically weigh a bit more than Potbellied Pigs, around 132 pounds or a little more, but their body’s build is similar in that they are short-legged with smaller ears, small eyes, and a short black snout.

KuneKune pigs are also incredibly docile and do well when paired with other farm or pet animals of a calm demeanor. Like most pet pigs, KuneKunes can be potty and house trained if you do decide to keep them indoors. KuneKune Pigs are also wonderful meat pigs.

The Cons of Raising a Pig in Your Backyard

The Benefits of Raising a Pig

Raising a pig or pigs in your backyard can be a fulfilling and wonderful experience for the entire family. Be sure to have the proper shelter, a decent amount of space for your pig or pigs to roam, adequate food and water sources, and access to veterinary care for emergencies and health checkups. It’s important to note that pet pigs, even the ones that are smaller in size, are still heavy and strong and can pose a threat to physical wellbeing, even if it’s only a minor one.

On the bright side, though, they’re incredibly smart and can be raised indoors without issue. They also usually do well when housed alongside other farm animals or pets, especially dogs, and are generally playful and loveable creatures. And, aside from the stereotype, they’re relatively clean animals that like to separate their living quarters from their restroom.

We hope we were able to give you some insight into how to raise a pig in your backyard!

In the words of Porky Pig, “That’s All Folks!”.